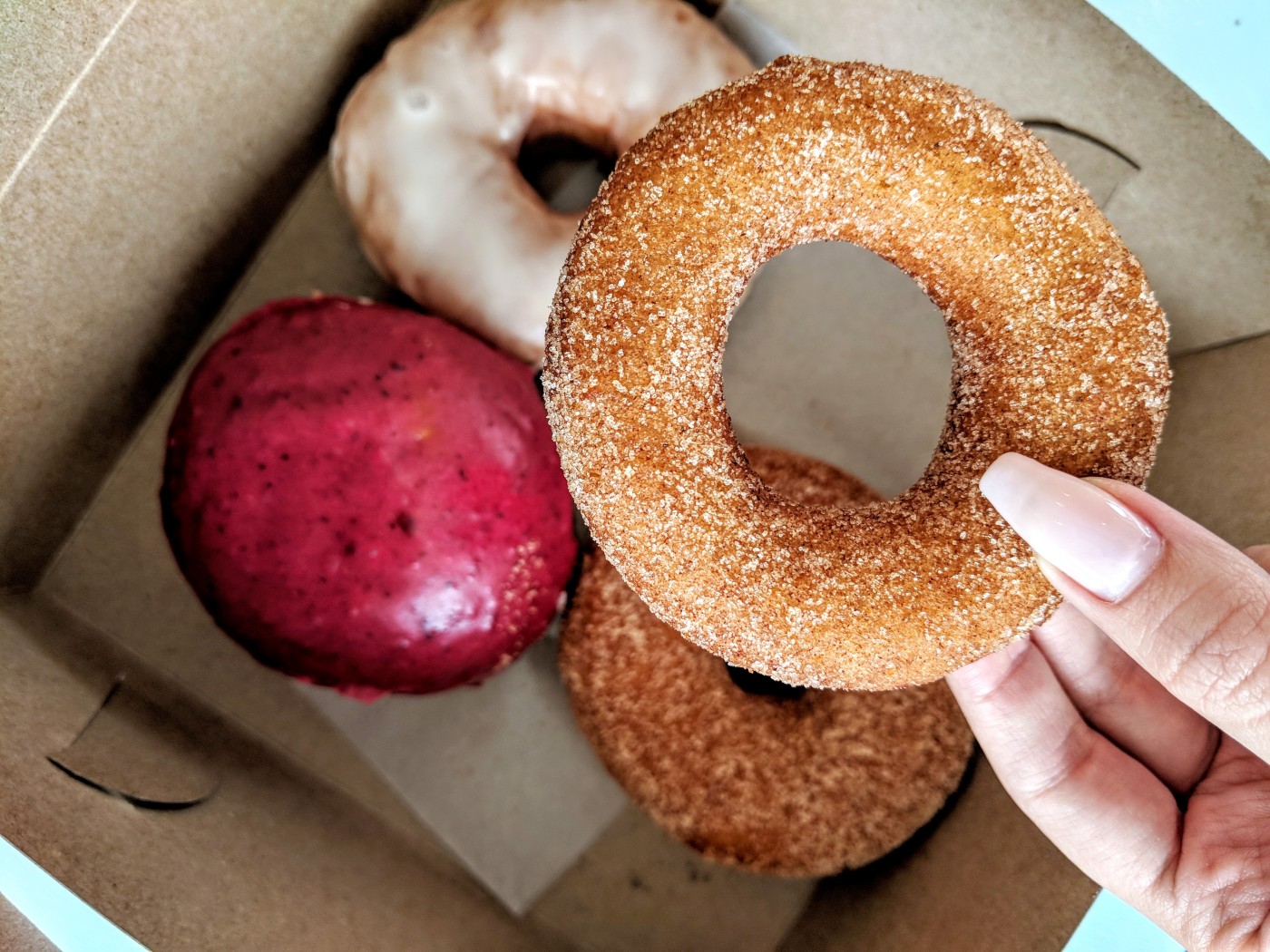 The Sunshine Doughnut Co. is a perfectly insta-worthy spot right off of Lakeshore in Burlington. The outside of the shop has “Sunshine” printed in gold letters on a white brick background, and a giant, signature pink donut in the sky. Many dessert-seekers and social media enthusiasts can be seen snapping a photo in front of Sunshine’s signature signage for the ‘gram.

Inside the café, there are plenty more opportunities for the perfect Instagram picture – white walls, floors, and a marble bar area are accented by gold and various shades of blue, which complement the giant pink sprinkle donut painted on the wall. If you’re looking for a wider selection of donut flavors, make sure you get to The Sunshine Doughnut Co. early – baked goods are made fresh and hand-frosted daily and will sell out by the end of the day.

While The Sunshine Doughnut Co. specializes in donuts in particular, they offer a wide variety of interesting flavors to please both purists and adventurous foodies. The shop does full sized donuts in flavors like Mixed Berry and Goat Cheese, Birthday Cake Stuffed, Apple Cider Cake, Summer Berry Sangria, PB & J, Dulce de Lecce with Brownie Crumbs, and so many more inventive flavors. There are also classic donut flavors like chocolate dip with sprinkles, apple fritters, regular glazed, cinnamon sugar, and their signature pink frosting dipped with sprinkles. When you feel more like snacking, there are also donut holes available (called Bart Bites), or giant cookies. 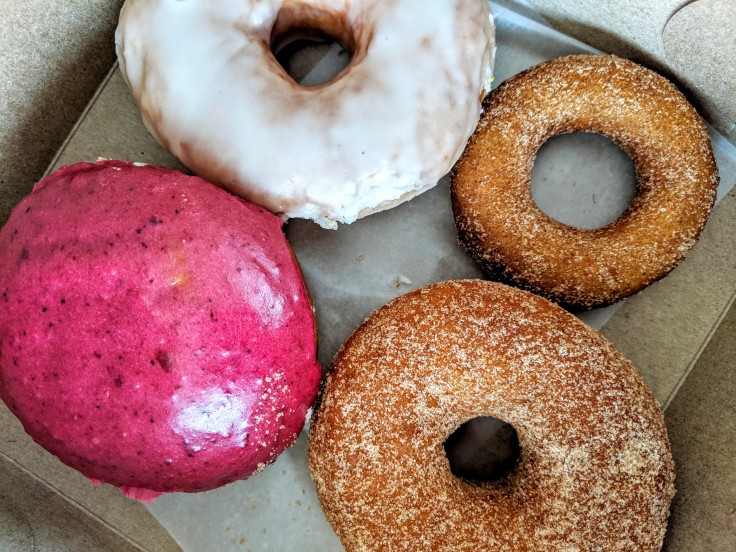 We tried two classic donuts: the cinnamon sugar and regular glazed varieties; one unique flavor: the mixed berry and goat cheese filled donut; and one cake donut: the apple cider donut. The classics were big yeast donuts. The dough itself was fluffy, but still substantial. There was a generous glaze on the regular glazed donut, but the glaze was mostly on top as if it were dipped and flipped to set. The cinnamon sugar donut had an excellent texture, with crunchy sugar granules crunching and melting away like subtle, warm, fall-inspired fireworks in your mouth.

The apple cider donut had a cake base and was visibly thinner and shorter than the yeast varieties. It was also covered in cinnamon sugar. It was delightfully fluffy for a cake-based donut and had an apparent taste of apples warmed up with cinnamon.

The mixed berry goat cheese filled donut was our adventurous selection for the day. Holding this donut makes one feel like they are about to embark on a bit of a journey. This was a hefty, napkin-requiring meal. The same fluffy yeast dough was dipped in a slightly tart berry frosting and was stuffed with a sweet yet characteristically earthy and similarly tart flavor. In essence, the filling tasted like a lighter cheesecake with a bit more complexity in terms of flavor and texture. Overall, it was actually surprisingly delicious, despite our initial reservations about a goat-cheese donut.

To wash down whatever goodie you decide on, The Sunshine Doughnut Co. also has a variety of beverages to suit any taste. They brew cups o’ Joe from Detour Coffee Roasters , another Burlington-based establishment, and also have hot chocolate, a honeybee latte, and other classic coffee and tea beverages. We tried the hot chocolate and honeybee latte. The hot chocolate was not super rich, but tasted more like it had a water base instead of milk, but was still decent. The honeybee latte is what we recommend – earl grey tea in steamed milk with vanilla and honey. Perfectly simple and delicious.